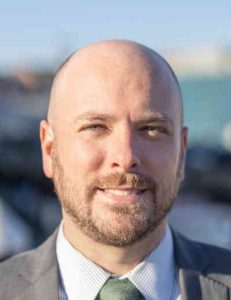 Andrew is a Maine native who received his B.A. in Philosophy, with a minor in English, from Loyola University Chicago. After college, Andrew developed his interest in law by working as a research and litigation paralegal in a mid-sized Chicago law firm. His affinity for the state of Maine drew him back in 2012, when he began law school at the University of Maine School of Law.

Andrew joined Clifford & Clifford as an associate in the fall of 2015. He maintains a broad-based litigation practice, with focuses on civil rights and whistleblower protection in the employment context, as well as tort law, disability rights and education law. Andrew worked closely on an appeal before the First Circuit Court of Appeals in Pippin v. Boulevard Hotel Corp., in which Clifford & Clifford successfully broadened and secured the protections afforded to employees under the Maine Human Rights Act, and Maine Whistleblower Protection Act. He has experience in trial practice and alternative dispute resolution.

Andrew is an avid fly fisherman. He enjoys skiing, boating, camping, and exploring the islands of Casco Bay.